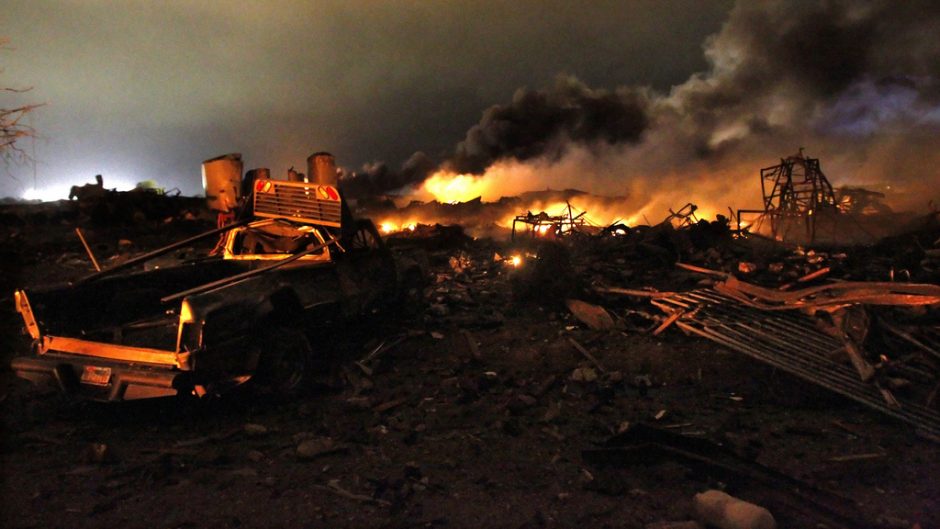 On April 17, 2013, the headquarters of a fertilizer company in the town of West, Texas was “obliterated” by an ammonium nitrate explosion. Fifteen people were killed, up to 200 were injured, and up to 80 homes were destroyed.

In April of 2013, no one (including the volunteer firefighters who first responded to the 911 call about a fire at the storage facility) should have been anywhere near West Fertilizer Company. I say this because, at that time, we already knew that:

Despite these warnings, the company was operational and doing business on the day that the plant exploded. This is unacceptable. Here we see another example (as in Flint, Michigan, more recently) of a bunch of regulatory agencies dipping their proverbial toes in the water of a coming catastrophe and each and every one of them failing to prevent it.

Worse, we have no reason to believe that these types of failures won’t happen on even bigger scales (nuclear, for example). Children have been poisoned by tap water in Flint, 15 people killed and many more injured in a blast in Texas; it certainly doesn’t breed confidence. Why are government agencies failing to prevent widespread lead poisoning and a company’s sloppiness in storing and keeping ammonium nitrate, the main ingredient in the truck bomb at Oklahoma City in 1995?

These agencies receive millions of dollars in funding each year, and their jobs are to inspect, monitor, and enforce safety standards. Often, they seem to look for reasons not to do those very things. If they don’t have the power or authority to shut down dangerous operations – of any kind – for good cause, then they need to be given that power and authority.

The chair of the U.S. Chemical Safety and Hazard Investigation Board said it best: “The fire and explosion at West Fertilizer was preventable. It should never have occurred. It resulted from the failure of a company to take the necessary steps to avert a preventable fire and explosion and from the inability of federal, state and local regulatory agencies to identify a serious hazard and correct it.”

Last week, the Bureau of Alcohol, Tobacco, and Firearms (ATF) reported that the original fire at West Fertilizer was intentionally set.

My upcoming novel, ULTIMATE ERROR, is about mistakes and chain reactions by which human beings may ensure self-extinction.