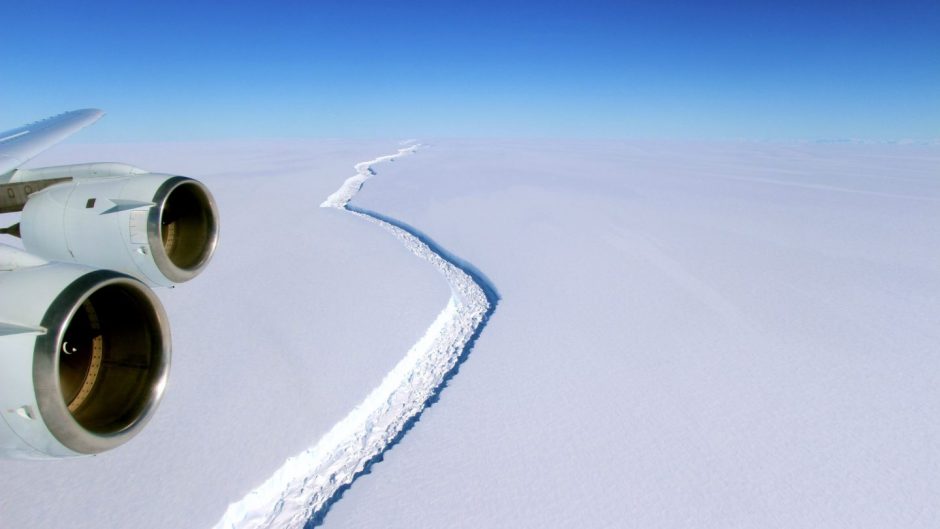 “This was absolutely a wakeup call,” says Kelly Brunt, talking about the 2002 disintegration of a Rhode-Island-sized section of the Larsen Sea Ice Shelf in Antarctica. Why should we care about the opinion of this woman speaking to the PBS Newshour? Well, for starters, she’s a glaciologist for the Goddard Spaceflight Center at NASA and the University of Maryland’s Earth System Science Interdisciplinary Center (ESSIC). Her research includes studying Antarctic ice shelves and the histories of glaciers.

Also, Brunt and many other scientists are currently observing a recently discovered crack in the shelf which could lead to the “calving” of a section the size of Delaware. In fact, members of the British Antarctic Survey at the Halley VI research center were evacuated in late February because of the shelf’s history of instability.

Devastating events like hurricanes Katrina and Sandy, the massive 2016 floods in Louisiana, the major droughts in California (and their attendant wildfires), even the rewriting of all the record books with highest temperatures ever last year haven’t been enough of a wakeup call for most Americans. So maybe state-sized blocks of ice cracking away from glaciers will do the trick.

According to Brunt and others, there’s no doubt about the greatest contributing factor in the accelerated calving and the new fissure: global warming. And the greatest contributing factor in global warming? Greenhouse gases from human activity. Any debate about that, in the parlance of 2017, is a fake debate. The certainty (and research) of thousands of scientists worldwide supports the human activity model, and debate at this point only contributes to slowing the availability of remedies that we need yesterday.

Whether it’s a strange deathwish, blinding avarice, or a combination of the two, fossil fuel companies have chosen to continue expanding drilling and mining as if nothing were happening. Except, of course, they have launched massive PR campaigns touting how many jobs they “create” and how shiny and happy their workers are. Notice that they never use the words “climate change,” much less “global warming.” It’s gaslighting (no pun intended) of the worst kind.

There’s a popular mentality that accepts mutually assured destruction in global warming, and the parties involved are both American. It’s as if yielding to renewable energy advocates (and science itself) would represent a defeat so great that death—for both sides of the issue—would be preferable.

Instead, apart from politics, we ought to look at the big picture in the story the Earth is trying to tell us. Anyone can do this. Extreme weather—floods, droughts, Category 5 hurricanes, and all-time-record-breaking high temperatures—combined with melting, cracking glaciers that shock top glaciologists. What do these images, these realities, tell a human being who for a few minutes puts aside their political party line?

My upcoming novel, ULTIMATE ERROR, is about the human factors in natural and unnatural disasters. How do our errors we contribute to the tragedies, how do we respond in their midst, and how do we deal with the aftermaths?