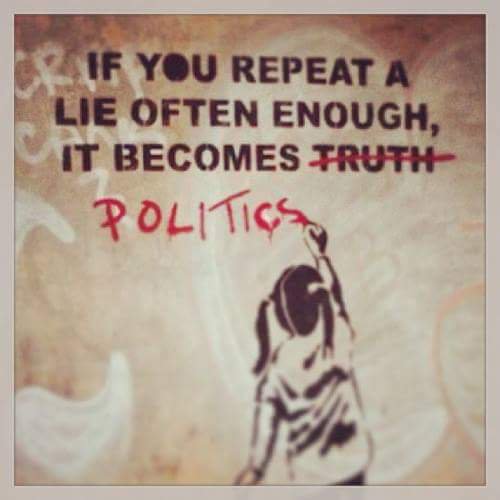 The headline on December 21, 2016: “Spiking Temperatures in the Arctic Startle Scientists.” The news site: National Enquirer? The Globe? No and no. How about the New York Times. Yes, the report of “startled scientists” comes from one of the most respected publications in the world.

Yet, we have entered a most dangerous time for humankind. Some call it the “post-truth” era. Talk about startling! Let’s not mince words here: homo sapiens cannot survive without truth. It’s like saying we’re in a “post-food” era; This means trouble!

And what do the much-maligned pundits mean when they say “post-truth”? It’s not so much the “fake news” that we’ve been hearing so much about. (I suppose the term “lies” is passé?) The most alarming element of “post-truth” is that facts are fast becoming a matter of opinion. In our ever more customizable world, many people are now customizing their own realities. “Common ground” is disappearing. “I have my ‘facts’ and you have yours, and never the twain shall meet!”

Human beings are social animals, and I’m not talking about Facebook. My friends, we cannot expect to live long on this earth, each with his own personal, private reality. It is nothing but hubris that keeps us from acknowledging this most basic fact and taking corrective measures. History shows that arrogant masses are inevitably dealt horrific, mortal blows. Toward this same somber fate, America today goes.

So, how do harrowing headlines and a stories such as the ones in the New York Times become normalized? In other words, how does each person who reads them or hears about them decide which facts jibe with their opinions (and thus become bonafide facts for her/him)? Which facts does s/he “disagree” with? This is the process by which the “startling” information (as described by scientists) becomes part of “someone else’s agenda” and dismissed. Every day in America, the good, hard work of journalists and scientists is tossed into the garbage heap by the ton.

We become highly opinionated and ill informed. It’s the American value of individualism carried to a deadly extreme. No longer can we be affected, or spurred into action, by good journalism or sound science. Like the villagers who became cynical in “The Boy Who Cried ‘Wolf’,” humankind is in an existential crisis that it cannot bring itself to believe. The stakes for our species are, of course, much higher.

Somehow, an awakening must come. The problem there is that, too often, the awakening occurs too late. We must, therefore, endeavor to scrape away the callouses from our hearts, minds, and souls. While deliberating gluts of information, we must be sensitive. Whatever is causing our insensitivity must be banished.

Scientists have long warned us of devastating global warming. Now, even they are jolted by the sudden accelerations thereof in certain regions. We must remember that there are billions of dollars spent on helping convince us to discard these warnings. Even for me, it is difficult to believe such cynicism exists, but it does, and we had better believe it.

My upcoming novel, ULTIMATE ERROR, is about the tolls of human hubris today.