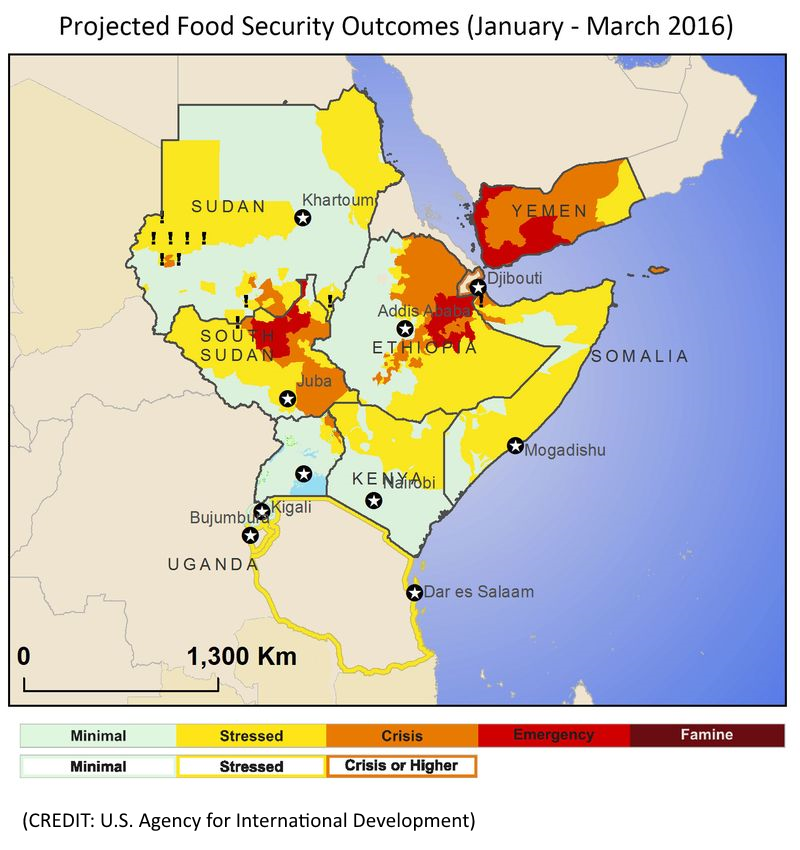 War. Drought. Refugee crisis. This is the “perfect storm” for famine.

A drought, its worst ever to that point, was one of the stressors at last decade’s end that brought Syria to the instability preceding its civil war. Now, with nearly 11 million Syrians displaced by the fighting, another drought has struck the country, and this one is its worst in 900 years. A Syrian famine has begun.

Here is yet another reason to think long and hard before taking up arms in an offensive against one’s neighbor. Ethiopia is also enduring a drought. El Niño has brought the second consecutive drought-related, nationwide crop failure to the northeastern African nation.

But, because Ethiopia is not embroiled in an all-out war, the prognosis for it avoiding famine are much better than Syria’s. Aid can actually reach the people in need in the small towns and villages east of Addis Ababa. And the collaboration among its state government, the United States Agency for International Development (USAID), and a relatively new monitoring system has been succeeding like nothing else before.

As reported on the WNYC radio program “The Takeaway,” the Famine Early Warning System Network (FEWSNET) works closely with NASA, NOAA, USGS, and the USDA to provide its USAID partner with everything from advanced weather information to crop performance data.

USAID receives monthly projections from FEWSNET about “food-insecure” areas but, sadly- though-understandably, its reach into war zones is minimal. On the FEWSNET website, warnings like this one appear: “Conflict-related disruptions to agricultural production, livelihood activities, and markets will also drive internally displace persons (IDPs) and poor households in Sudan People’s Liberation Movement-North-controlled areas… into Emergency (Integrated Food Security Phase Classification [IPC] Phase 4) with the early start of the lean season in March 2015.” Because of the armed conflict, however, there’s only so much USAID can do with that information.

Together, the agencies try to keep communities elsewhere (such as those of a combined 10 million people in the current Ethiopian instability) and their economies in place and intact, to prevent the refugee crises that gravely exacerbate food instability and lead to famine conditions.

This wisely holistic strategy allows for the promised $1.5 billion in international aid for the area (as of March 7, 2016 only about half of that has arrived) to be spent, not only on consumer-ready food assistance, but on wide-ranging programs to reinforce communities – seeds, water, healthcare, and more. As USAID points out, people remaining in their homes (when possible) during a food insecurity crisis provides ballast for their communities and markets, however small, to remain intact.

Meanwhile, FEWSNET and its high-tech partners expect El Niño conditions to worsen during the summer months. In fact, food-insecurity warnings have already been issued throughout much of southern Africa.

El Niño-induced droughts may strike again this year, but most of Africa is much better positioned than in past droughts such as the ones which spawned the 1984-1985 famine publicized by the “Band Aid” and “We Are the World” campaigns.

My upcoming novel ULTIMATE ERROR explores, in a fictionalized, scientific way, the current potential for catastrophic events worldwide and the actions of men and women to increase or decrease the risks.