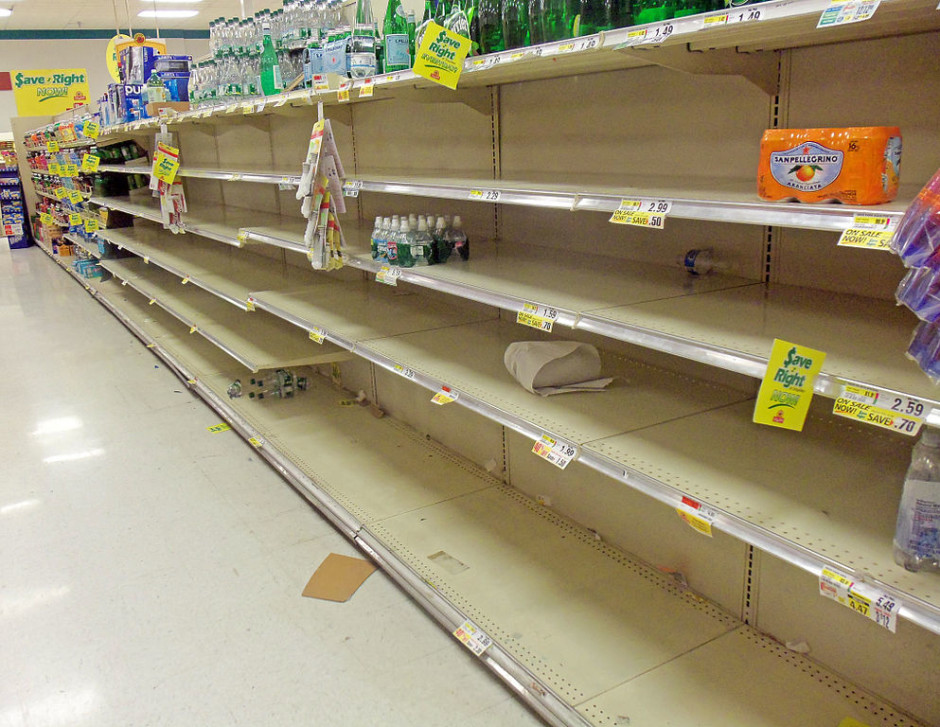 A man from San Francisco once told me that after an earthquake, even a minor one, alcoholic beverages disappear from stores within a few hours. It makes sense that people might want to settle their nerves (in moderation) and perhaps have “a little help” getting through the sometimes difficult hours and many inconveniences of the aftermath. This type of “run” on alcohol, though, is a mild example of the social psychology in play before, during, and after catastrophes of varying magnitudes.

While we have much experience in local and regional crises where resources like food, water, and medicine become scarce or even completely depleted within that area, our experience with shortages of essential supplies on national and international scales is rather limited. Of course, in many ways, that’s a good thing! Yet, properly prognosticating and preparing for large-scale disruptions in supply chains of basic goods becomes that much more difficult, because even top experts must, at some point, necessarily extrapolate from events which have already come to pass.

The list of these includes the atomic bombings of Hiroshima and Nagasaki in 1945, the U.S., Russian, and Syrian civil wars, the Great Depression, and the march of fascism across Europe during World War II. The atomic bombings top many such lists because of the quick, sudden, and massive attacks. Wars are often protracted, with crises growing and multiplying more gradually. Devastating, mass-destruction events cut survival lines immediately.

The dynamics of the Hiroshima and Nagasaki tragedies are thus comparable to natural disasters. Among the most challenging examples for research-oriented, large-scale-emergency managers and social psychologists alike are the bubonic plague of the 1300s, the flu pandemic of the 1910s, and the African (1980s), Chinese (1959-1961), Indian (1769-1773), and Irish (1840s) famines.

While all of these disasters differ in the ways resources were sought and procured, they also possess commonalities which are helpful in predicting human behavior in the event of a national or international, man-made or natural, catastrophe in the 21st Century.

In a general sense, the primary change in human behavior before, during, and after a widespread disaster is the shift from a growth mentality to a survival mentality. These mindsets are often reflected well in popular culture.

In 1960s America, there was emphasis on enlightenment and alternative lifestyles to contrast those of post-World-War II and Vietnam warfolk. The era is generally regarded as a time of cultural growth. In contrast, late 20th Century and early 21st Century America has exhibited a preference for – some might say an obsession with – survivalism. The most striking evidence of this mindset is in the unprecedented popularity of television programs like the “Survivor” series, “The Walking Dead,” and most recently National Geographic’s “Doomsday Preppers.”

The United States seems primed for a survivalist scenario. One of the key elements of survivalism could partially explain why: competition. In any major disaster, human beings compete more intensely for available resources, and competition, via capitalism, is built into the psyche of Americans.

My upcoming novel, ULTIMATE ERROR, explores the dynamics of a world ever on the verge of international, existential crisis.