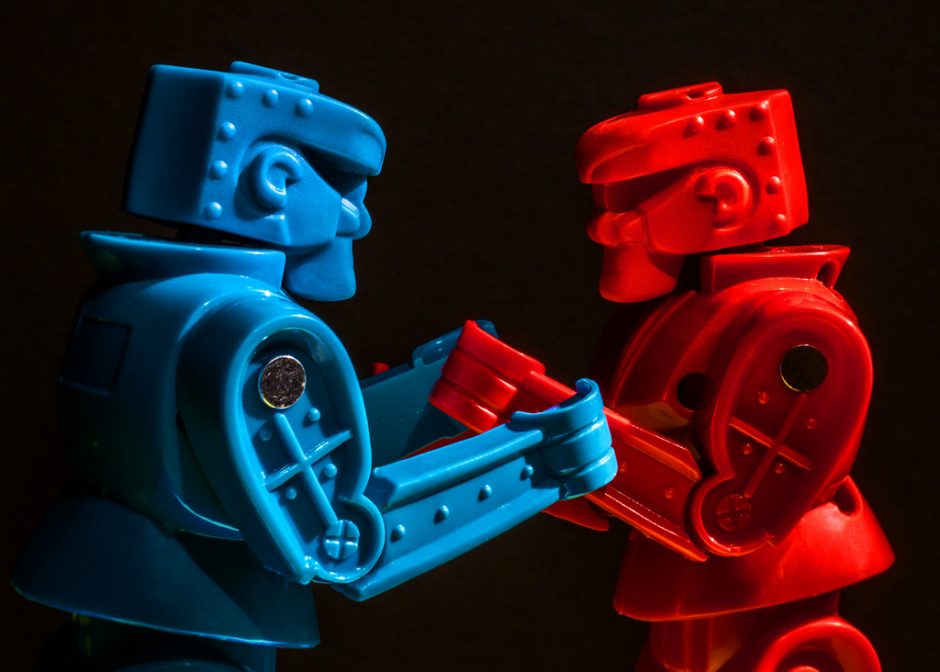 “For what shall it profit a man, if he shall gain the whole world and lose his own soul?” –Matthew 8:36

As we enter the home stretch of the 2016 election cycle, it seems little escapes appropriation by “Team Red” or “Team Blue” – two sides ever rooting for themselves and never acknowledging the virtues of the other. Have we modeled our political discourse in the U.S. after an NFL game between two bitter, longtime rivals?

Disaster preparedness, a priority concern for every U.S. resident, seems daily to become further the “territory” of anti-federals, Second Amendment activists, and other groups most often associated with “Red” America.

For instance, this past Saturday, South Carolina hosted an event called Survival Expo. There, you would expect to find all the latest gadgets, tools, and even food for emergency use. Interestingly, though, a photo accompanying the announcement of the event in the local paper featured a sales booth above which hung a sign that included “AR-15 [semi-automatic rifle] Parts and Accessories,” “Body Armor,” “Tactical Equipment,” and even “Combat Gear.”

No clearer example is necessary in asserting the fact that many people see a major disaster in America as a prelude to war! What would the war be for? And whom would it be against? The dynamics and verbiage in the survivalist movement must be made crystal clear as opposed to the current hush-hush, wink-wink attitudes which leave ample room for dog-whistle communication. The everyday citizen and regular, preparedness-minded American has every right to know what the intentions of these heavily armed groups are.

If this type of “preparedness” was going on in South Central Los Angeles instead of South Carolina, you’d better believe that law enforcement would be all over it with intelligence gathering and “gang interventions.”

Simply put, our country cannot afford yet another dividing line. If laws need to be changed or written so that they’re more consistent across the nation, so be it. Allowing groups to amass weapons in a “Red” state under a “survival” or “prepper” banner while prohibiting groups in a “Blue” state from doing so under other banners is not only a formula for disaster, it’s highly undemocratic.

Recently, I came across a blog that stood out for its genuine spirit of community and peace. “We are maximizing the damage by losing our ability to be compassionate,” begins the author of the piece, “Emotional Intelligence (Part 3).” She does not mince words when it comes to armed-to-the-teeth doomsday preppers: “No one has a bunker big enough, preppers await their glory moment of destruction and chaos.”

Hers is an all-encompassing call for sanity. “We have to remember kindness has a purpose. That caring if one another is fed, matters.” Was there anything like a kindness booth at Survival Expo? For what shall it profit a man, if he shall lose the whole world, lose his own soul, and gain only loneliness?

My upcoming novel, ULTIMATE ERROR, is about the challenges facing mankind now that we are closer to self-annihilation than we have ever been. “Rugged individualism” is a wonderful American quality, but will we cling so desperately to it that we pay the ULTIMATE price?