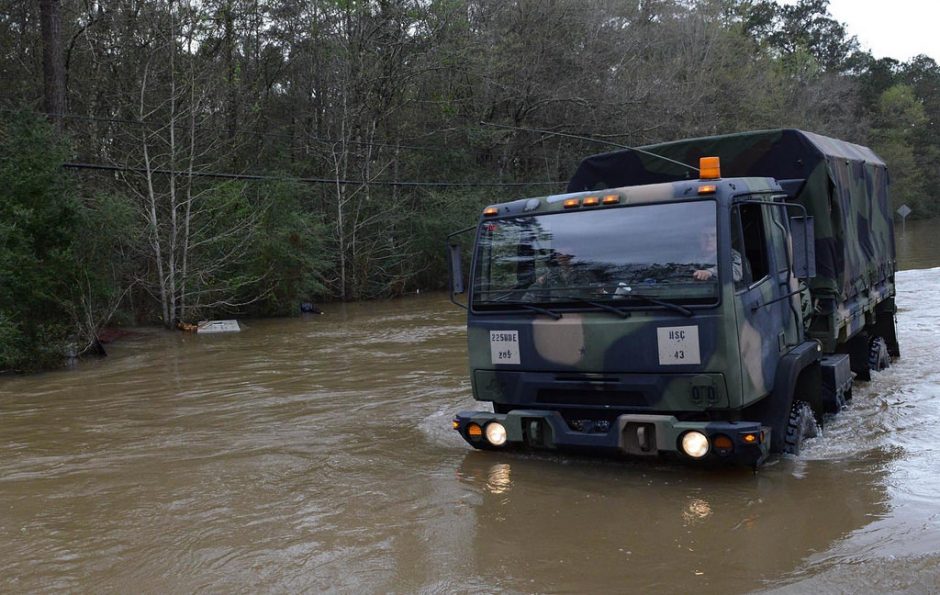 Things to say, you just can’t take ‘em with you

This flood will swallow all you’ve left behind

–from the song “Muddy Water” by Phil Rosenthal

Because we know that global warming is real and because we have been witnessing its effects for years now, whenever I hear the word “record” I perk up my ears. Record: heat, flooding, drought, sea levels, etc.

Yesterday, Weather.com, which is the official website of The Weather Channel, featured a stunning photo of a woman in Louisiana walking on a flooded street where the water came up to her chest. The headline: “One Dead, One Missing in Louisiana Flooding; Evacuations and Rescues Ongoing as Rivers Rise Toward Record Crests.” Record crests.

Ten- to twenty-inch rainfalls over many rivers and creeks in Louisiana and Mississippi are causing high crest levels, and the heavy rains over Gulf Coast towns are forecast to continue into Saturday. Early Saturday in Louisiana, the Livingston Parish president and sheriff called for voluntary evacuation along the fast-rising Amite River.

Louisiana governor John Bel Edwards declared a state of emergency because of the flooding and the high crests. The National Guard has deployed special high-water vehicles to assist the hardest-hit parish of St. Helena.

Everyday motorists didn’t stand a chance against the high waters, and Weather.com posted amateur footage of several vehicles being washed away in the currents. The videos include an SUV resting at the spot where it had been pushed, nose down in a ditch and half submerged. A semi tractor-trailer is shown drifting off the highway and down a small embankment.

A meteorologist for Weather.com warned, “If you see a nearby river rising, get to safety immediately.” The comment was intended for those new to, or visiting, the area. Locals know the meaning of a rising river, they know where the higher ground is, and they know how to get there. That’s not to diminish the fact that the evacuations get more difficult every day.

The American Red Cross, which points out that floods are among the most common natural emergencies, recommends preparing supplies well-ahead of time. A three-day supply of water and food is included on the list, the full version of which you can find at their website. They also recommend being prepared to seek higher ground immediately, once a flood warning is made.

I think of the overheated air, land, and waters that cause these floods. In my mind, it’s difficult not to liken them to a pot that boils over on the stove. It’s a reminder that we face not only the immense tasks of slowing and stopping the warming of the climate, but also reversing it, so that these extreme, record weather events aren’t so frequent.

Also on Friday, NOAA put the number of forecasted Atlantic hurricanes for the rest of the season (ending November 30) between 12 and 17, adding that 2016 might be the “strongest hurricane season since 2012.”

My upcoming novel, ULTIMATE ERROR, is about the mistakes humans have made – and continue to make – to bring us closer to extinction on Earth.