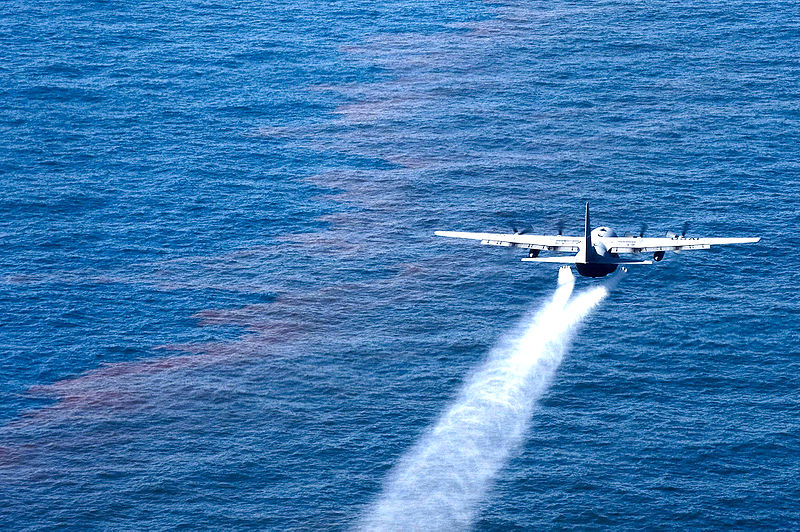 What does it say about the oil industry in general, and the Standard Oil-Exxon-BP partnership that brought the chemical compound to market in particular, that they call their product “Corexit” (as in “corrects it”)? Do they really think anyone will believe that spraying 2 million gallons (by conservative estimates) of the toxic chemical on the Deepwater Horizon spill in the Gulf of Mexico in any way “corrected” the catastrophe?

Here’s what it definitely does correct for BP: The optics of a many hundreds of miles in diameter oil slick on the surface of the water. Where any news helicopter can swoop in for video and still images for the people to see. The people. It’s our country, not BP’s, not Exxon Mobil’s, not Standard Oil’s.

Far from fixing the massive spill, the oil conglomerate’s Corexit, much independent evidence shows, made at least part of the disaster worse. The chemical, also known as deodorized kerosene, is sprayed by airplane, cropduster-style, over oil slicks and bonds with the crude. Beads of the Corexit/petroleum emulsion form and sink below the surface—out of sight. But experts say the emulsion is way more toxic than either the dispersant or the oil alone. The hyper-toxic beads, they say, settle on the sea floor and wreak havoc on every ecosystem present.

The harmful effects of the dispersant-oil mixture are felt on shore, too. Reports from the Gulf Coast confirm many marine biologists suspicions that Corexit is absorbed by marine life, causing horrific mutations in the progeny of aquatic animals who haven’t died outright.

The official line from  the oil industry is that “no one” believes that tremendous amounts of crude coming ashore is a better outcome than blasting the waters with their beloved Corexit. But that, again, gets back to optics. We actually don’t know if, in the long run, whatever petroleum-dispersant mixture and/or mutated sealife does end up on land will be preferable to the oil alone.

The disaster began only eight years ago this month, and we simply don’t quite know what’s happening beneath the surface if the gulf with respect to the effects of the dispersant-petroleum emulsions, the microbes that were also introduce into the ecosystem by BP and their partners to “eat” the emulsion beads, and the natural flora and fauna at myriad depths. Of course, there are plenty of scientists exploring the area trying to find out.

It certainly sounds like a formula for a fantastical sci-fi monster movie. Can the bacteria, like the shellfish, also mutate? What are the implications of that? How do the microbes affect plant life and animal life directly? Let’s hope all the findings are within the realm of regular science and nowhere near sci-fi horror.

My upcoming novel, ULTIMATE ERROR, is about an oil spill cleanup gone horribly wrong. Chemical dispersants, petroleum-eating microbes. Catastrophic contamination on a national scale. The hellish scenario is not difficult to imagine in the real world.