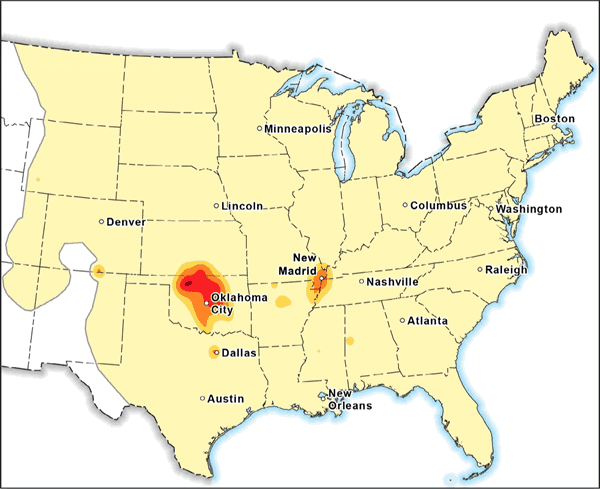 The United States Geological Survey (USGS) documents earthquakes in America, and a fascinating, mind-boggling fact has emerged from some of their studies. It concerns Oklahoma and the human-made disasters aptly and terrifyingly named the Oklahoma earthquake swarms (2009-present).

Before 2009, Oklahoma experienced a yearly average of less than two 3.0 magnitude earthquakes. Since then, the number has increased to hundreds per year. What happened in 2009? Oil companies began to inject their wastewater deep into the earth, and pressure from that activity began cracking the substrata. Earthquakes. Somehow, this was not, and still is not, illegal.

It points to the ever-increasing likelihood that, when humankind dies, part of the grand autopsy will read: “Petroleum.” First of all, our “practical” use of it – petroleum fuels – is killing not just humans, but all kinds of life. Also, we don’t know how to safely drill for it (see Deepwater Horizon, among thousands). We don’t know how to safely transport it (see Exxon Valdez and many thousands of other shipping and pipeline oil disasters). The “spills” cannot be fully “cleaned up.” Not even close.

Wastewater from fracking and other oil retrieval methods is injected into basement rock in Oklahoma, causing hundreds of earthquakes each year, including two major ones. A 5.7 magnitude quake hit near Prague, Oklahoma in 2011. Only five days ago, the strongest earthquake ever measured in Oklahoma’s history – at a magnitude of 5.8 – struck Pawnee, Oklahoma.

In other words, the lower-magnitude, oil company earthquakes also predispose the area to major earthquakes. The USGS has predicted that the problem will only worsen as this method of wastewater disposal continues. Now, with the record 5.8-magnitude quake north of Oklahoma City a few days ago, we see they are right.

The USGS has also released an animated map of the Oklahoma earthquake swarms. It’s quite something to behold. Clearly, we see that the swarms are caused by human activity. Is it fair to assume the United States Environmental Protection Agency (EPA) has seen this map and other USGS data? It wouldn’t be the first time two government agencies which should be closely related didn’t know what each other was doing.

Probably the best remedy the federal government could initiate would be the active devaluation of oil prices. As long as the oil companies have billions of dollars to throw around daily, our fate is in the hands of government regulators who, after all, are human beings capable of yielding to temptation.

At this point, we might look at the big picture of petroleum consumption and production in the U.S. What does it look like? Isn’t the WHOLE of it a disaster, really? Gasoline and diesel were once exciting energy resources, but haven’t we outgrown them? Don’t we now know better? Isn’t it incumbent upon the most intelligent species on the planet to FIND ANOTHER WAY? Or will we allow apathy and greed to snuff out everything we know and love about life one Earth?

My upcoming novel, ULTIMATE ERROR, is about human efforts gone astray. Our lack of humility in the face of Earth’s admonishments and desperate pleas.