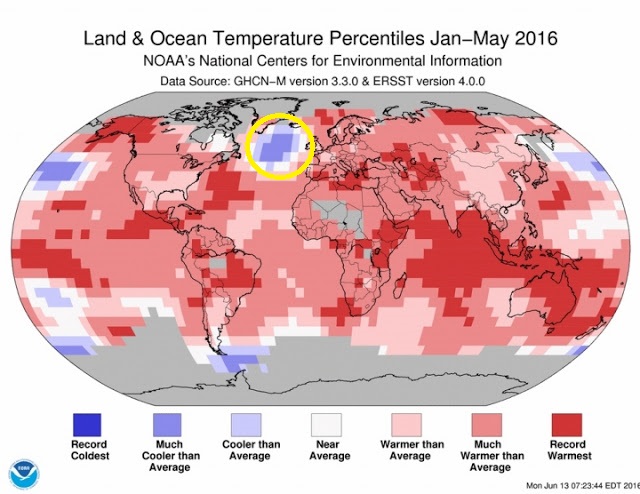 A “blob” of much colder than normal temperatures has emerged just south of Greenland in recent months, and climatologists aren’t yet quite sure what to make of it. That is only one of the unsettling bits of information coming from NOAA and others.

It’s officially summer now in the Northern Hemisphere, of course, and some scientists currently positing theories fear that global warming – yes, warming – has begun to disrupt the flow of warmer, mid-Atlantic waters northward.

To better understand what might be running amok, researchers point to the process known as the Atlantic meridional overturning circulation, or AMOC. Under normal conditions, AMOC transports vast amounts of warmer water from areas directly east of Canada and North America upwards towards Greenland and the adjacent Labrador Sea, as reported recently in the Washington Post.

The main concern – and you can count me as one of the concerned – is that cold, fresh water running off the southern coast of Greenland could be “pushing” the less-dense warm, salt/brackish water back south, from where it comes. Where is the cold, fresh water coming from? Melting Greenland glaciers, most likely. Hence, the connection to global warming.

If this is indeed the case – and the Post correctly explains that we’re only in the “debate” stage – not only would the northern regions of Europe be deprived of the warmer summer temperatures they’re accustomed to but, further south, that warm water, failing to circulate northward, would become hotter and hotter. As sea temperatures rose, so would sea levels.

Some experts cited in the Post piece say that if this cooling pattern near Greenland continues, it will disrupt the AMOC but that we’re not quite there yet. Either way, though nobody seems ready to say so, this feels like an acceleration of the deleterious effects of climate change. When this is studied further, I wouldn’t be at all surprised if the results are accompanied by an “update” or warning that we’re further along the path to major disaster than once thought.

As I assert in my upcoming novel, ULTIMATE ERROR, there are reversible mistakes and irreversible ones. Nearly all experts in climatology and oceanic studies agree that there is indeed a point of no return regarding global warming. We see the effects daily and, increasingly, we read reports like this one, about the possible disruption of AMOC.

We’re now talking not only about ocean temperatures and sea-level rise – we’re talking about changes in ocean currents. That’s another massive factor that can complicate the problems incalculably (at least at this point). Though there’s no consensus yet, scientists are concerned.

Probably, we are not past the point of no return on global warming. The question is: When will we accelerate efforts in proportion to the escalating problems? Let the next report not be that they’re beyond fixing.

My upcoming novel, ULTIMATE ERROR, is a fictionalization of life on Earth on the brink of ablation. What are the mistakes that have brought us to this point, and what errors can plunge mankind into extinction?