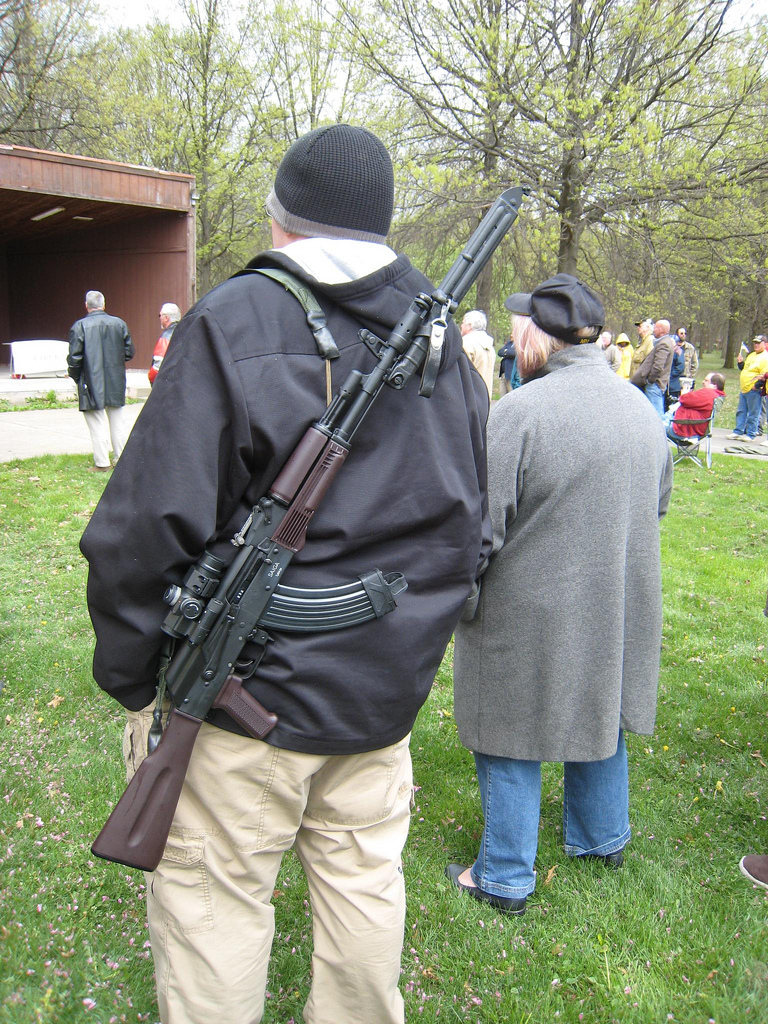 On Saturday night, a 26-year-old man wearing body armor and armed with an AK-47 semi-automatic rifle and a .357 Magnum revolver drew the attention of a citizen at a Kentucky Walmart. Police were called, and they removed the occupants of the car (which also included a 19-year-old man, a 20-year-old woman, and a six-month-old infant) without incident. How did the police manage to take control of the situation without any violence whatsoever?

Recently, we’ve heard a lot about armed suspects (or men simply reportedly carrying a gun) being shot by police arriving on the scene. One man in Baton Rouge, Louisiana was killed, as was another in St. Paul, Minnesota. In Florida, an unarmed healthcare worker who was lying on his back and had his arms in the air when police arrived was shot anyway, though he survived. All three were Black men. The race or races of the individuals in the Kentucky incident were not immediately disclosed.

One would hate to think that, merely based on race, the police officers at the Kentucky Walmart acted significantly differently than the ones in the shootings. Yet, the early reports already hint at trouble. Police officers who responded to the call say the subjects explained that they “were preparing for an Armageddon-type of event and needed supplies.” The problem is that, at this early stage, police officers were already describing the subjects’ motives, according to news accounts, based solely on what they were told by the subjects themselves.

Also, police found a “small amount of marijuana” in the car, yet they reported that the weapons were not associated with any crime. It’s unclear if Kentucky has laws prohibiting the presence of weapons and marijuana in the same place at the same time. What is clear is that other states do have such laws and that they likely would have been enforced, especially under different circumstances, such as during an urban drug raid.

The troubling confluence here begins with the location. Is an American openly carrying guns legally in front of a Kentucky Walmart safer than one openly carrying legally in his car in Minnesota? If so, why? Next, are the Kentucky subjects White, Black, Hispanic, Asian, or a mix thereof? It’s not a polite question, but it’s one that, when firearms are involved, must certainly be asked these days.

Most importantly and most worrisome is the disarming quality (literally and figuratively) with which the subjects imbued their story and for which the police officers apparently swallowed it. “We’re preparing for Armageddon, and we need supplies.”

Here’s what we absolutely cannot have – cannot afford to add to the explosive mix – when police interact with the public: Doomsday preppers with a readymade “free pass” from armed encounters, while other law-abiding gun carriers have police-issue arms pointed at them and, too often, fired.

In the (quite probably unhelpful) parlance of many in law enforcement, we cannot have all Armageddon preppers looked upon as “good guys” and people who carry legally for everyday protection looked upon as “bad guys.” Especially in an emergency, we can’t have this developing, new form of police profiling making things even worse.

My upcoming novel, ULTIMATE ERROR, is about the human race – on the brink of self-extinction. The pitfalls are many. Are we capable of avoiding them?