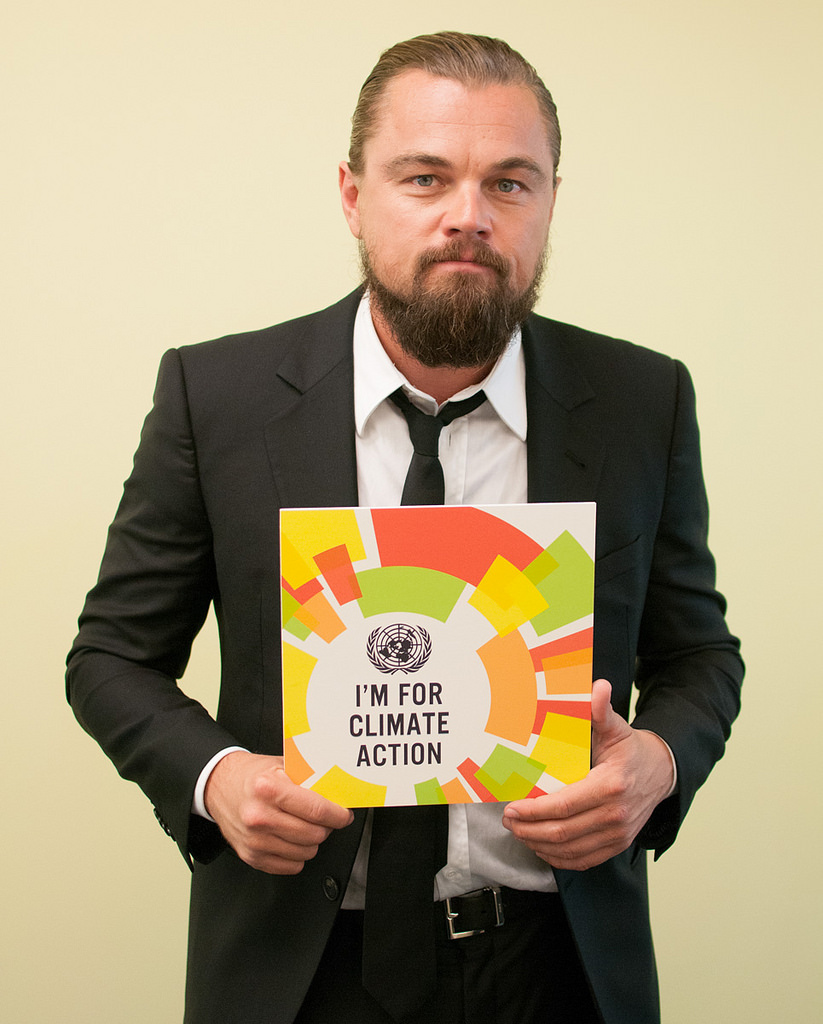 “A concerned citizen” steps up to the mic at international summit

“I’m honored to be here today, I stand before you not as an expert but as a concerned citizen, one of the 400,000 people who marched in the streets of New York on Sunday, and the billions of others around the world who want to solve our climate crisis.

“As an actor I pretend for a living. I play fictitious characters often solving fictitious problems.

“I believe humankind has looked at climate change in that same way: as if it were a fiction, happening to someone else’s planet, as if pretending that climate change wasn’t real would somehow make it go away.

“But I think we know better than that.”

Excerpt from speech at the United Nations climate summit

So began Leonardo DiCaprio’s address to the United Nations. Certainly, we’ve all heard about the faction in American politics that looks at Hollywood with disdain. “Wealthy elites,” they say. One might well ask, “As opposed to America’s chief executive and the members of his cabinet?”

I think it’s worthwhile to examine the comments of the UN Messenger of Peace. Is his really an elitist point of view?

“We know that droughts are intensifying, our oceans are warming and acidifying, with methane plumes rising up from beneath the ocean floor.” (TRUE) Just look at the extended droughts in California and how they’ve contributed to the nearly constant wildfires burning in the state. Marine zones are being studied extensively for signs of warming, and the signs are there. Including the ones DiCaprio specifies.

“We are seeing extreme weather events, increased temperatures, and the West Antarctic and Greenland ice-sheets melting at unprecedented rates, decades ahead of scientific projections.” (TRUE) Again, his statement is verifiable, unlike statements such as, “Global warming is a hoax.”

“None of this is rhetoric, and none of it is hysteria. It is fact. The scientific community knows it, Industry and governments know it, even the United States military knows it. The chief of the U.S. Navy’s Pacific Command, Admiral Samuel Locklear, recently said that climate change is our single greatest security threat.” (TRUE) Noteworthy that a military man cuts through the nonsense propaganda of geopolitical threats being larger than global warming.

“We need to put a price tag on carbon emissions, and eliminate government subsidies for coal, gas, and oil companies. We need to end the free ride that industrial polluters have been given in the name of a free-market economy, they don’t deserve our tax dollars, they deserve our scrutiny. For the economy itself will die if our ecosystems collapse.” (TRUE) Most of this comment is subjective, but it’s built from philosophies widely accepted around the world.

“The good news is that renewable energy is not only achievable but good economic policy. New research shows that by 2050 clean, renewable energy could supply 100 percent of the world’s energy needs using existing technologies, and it would create millions of jobs.” (MOSTLY TRUE) Most science and research support this encouraging outlook.

“Protecting our future on this planet depends on the conscious evolution of our species… This is the most urgent of times, and the most urgent of messages.” (TRUE) Clearly, this challenge tests our ability to evolve beyond self-destruction in the name of profits.

“Honored delegates, leaders of the world, I pretend for a living. But you do not…. And now it’s your turn. the time to answer the greatest challenge of our existence on this planet … is now.” (TRUE) What greater challenge? And if not now, when?

My upcoming novel, ULTIMATE ERROR, is about social dynamics in the wake of a widespread catastrophe.