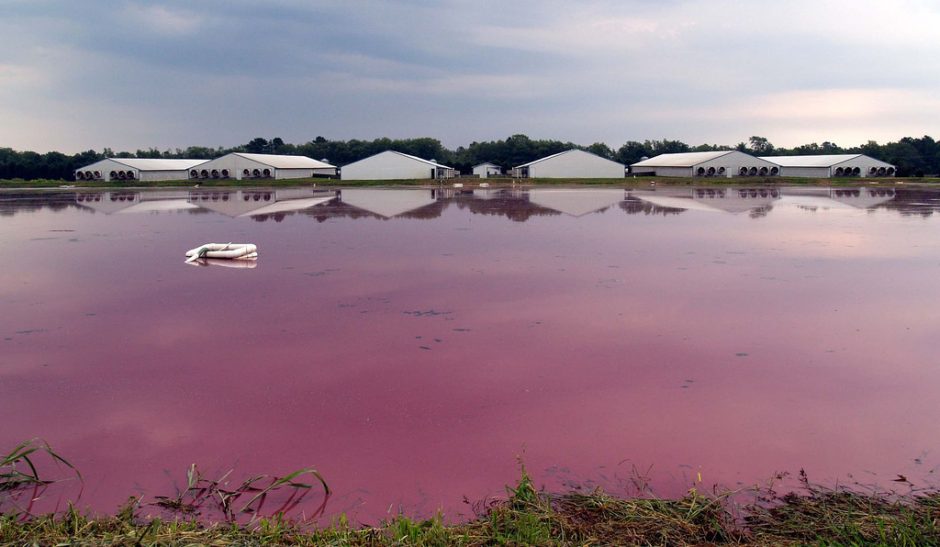 “Hog-waste lagoons”: They’re exactly what you think, and they’re part of the disaster

For 17 years, the State of North Carolina has known about, and even marginally worked to abate, the horrific problem of hog-waste lagoons. These man-made “pig-poop” ponds, as National Geographic calls them, are supposed to hold the 19 million tons of hog waste produced yearly on factory farms in the Tar Heel State.

Carolinians may boast about tar on their heels, but the pig farmers sure avoid getting pig feces on their boots. They prefer to make hog waste a problem for all North Carolina, not just the people who make millions off of the animals that produce the waste.

Before I get into what (extremely predictably) happened to those lagoons as Hurricane Matthew whipped North Carolina earlier this month, I’d like to mention the pattern of pollution here. What do enormous, multi-million and multi-billion dollar industries do with their hazardous waste and hazardous products? Do they make sure it doesn’t bother anyone or anything else? Of course not.

Whether they’re oil companies spilling crude and fuel all over the place, nuclear power plants burying radioactive waste in areas near you, or pig farmers putting their poop into open ponds, this is where these very rich people suddenly want to share!

Basically, “anaerobic lagoons” (nasty corporations are great with creating euphemisms) are used for two reasons only: cost and convenience. It’s a cheap way for Concentrated Animal Feeding Operations (CAFO)—another euphemism, for animal concentration camps—to siphon manure slurry off into a hole in the ground and just let it sit there endlessly (that they call “treatment”).

Of course, the environmental concerns are myriad, including adverse effects on nearby human populations. These are the most common gases given off by the putrid, stinking ponds: ammonia, hydrogen sulfide, methane, and carbon dioxide. Thank you, corporate farmer!

And that’s when they can keep the unholy slurry inside the basins. As North Carolina has experienced repeatedly, the lagoons often overflow due to bad weather and/or shoddy construction. Then, as a bonus, you get antibiotics, estrogens, bacteria, pesticides, heavy metals, and protozoa on your land and/or in your water.

Aerobic lagoons are more effective, safer and, frankly, less odorous, but they also are more expensive to build and maintain. That’s why nearly all pig-poop ponds are anaerobic.

In 1999, Hurricane Floyd struck North Carolina and 25 million gallons of manure slurry spilled into surrounding ecosystems. Though after Floyd, the state banned new construction of hog-waste ponds, 17 years later, Hurricane Matthew has put hundreds of the lagoons under water.

The flood waters began to recede last week, and the damage is now beginning assessment. Meanwhile, the pork industry boards are already on the defensive, claiming that “ponds underwater remain intact” and have not breached or overflowed. Remember, these are pig experts with specialties in fecal matter and hogwash.

My upcoming novel, ULTIMATE ERROR, is about the cynicism and avarice of certain individuals and corporations that put us daily on the brink of human extinction. Is it really worth trying to cheat the system, when the system is the entirety of earthly life?