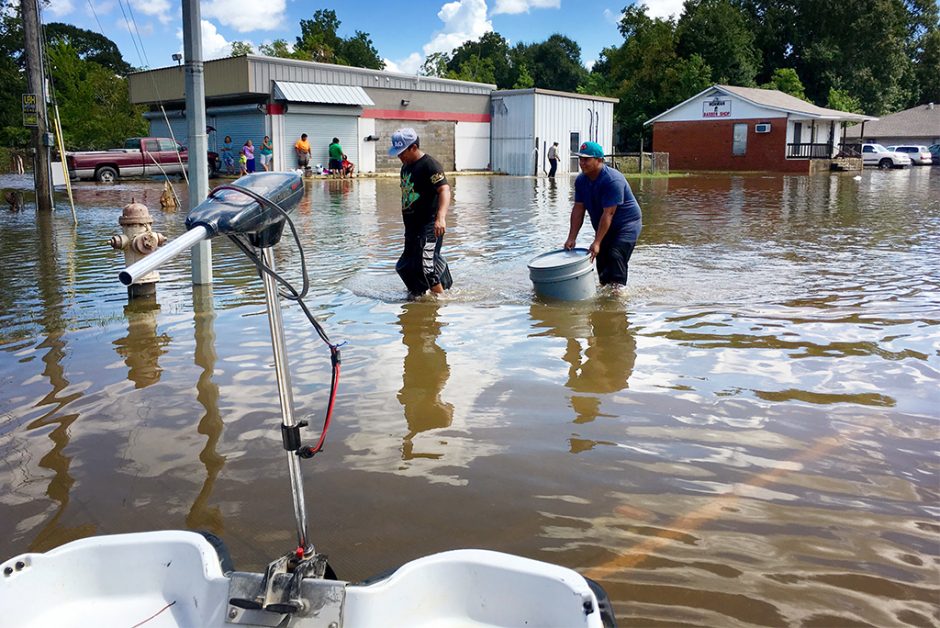 Are parts of the United States becoming uninhabitable because of global warming?

“This is how the time goes

In an ordinary town

And this is how it all ends up

When you run the whole thing down

“This is how it’s gone

This is how it’s already gone and I know

You keep going along…”

–from the song “Believe What You’re Saying,” written by Bob Mould

Just as many residents of southeastern Louisiana finished rebuilding from the floods of 2016, they were hit with more heavy flooding this weekend. Now there’s even talk of buying out entire neighborhoods near Baton Rouge and moving everyone out. The implications are astounding. We may very well be looking at the first global-warming-related condemnation of populated U.S. lands.

While the potential displacement of many thousands of people—some of whom have lived there their entire lives—shocks the conscience, we can hope that it will also shock those who will foot the bill into taking action. Specifically, action against the parties that have made these never-before events happen. Namely, the fossil fuel companies which have contributed most (and profited most) from the carbon dioxide poisoning of the atmosphere.

Oil and coal perpetrate crimes so vast, we might call them untraditional in modern jurisprudence. There’s hardly a square inch on the planet that hasn’t been used for, and/ or damaged by, their criminal acts. So, they are inconspicuous by their ubiquity. It takes a wide angle view on the world to actually come to the conclusion that Hey! Fossil fuel companies are culpable for most of this.

Meanwhile, we’re stuck in the same old routine of bailing out billionaire tycoons through small contributions from average people. The pop stars who mount these grand benefits for “disaster relief” and so forth are inadvertently complicit. The oil and coal magnates must be laughing (all the way to the bank) as individuals take up their slack.

The better alternative is to have the Justice Department bring billion-dollar lawsuits against each and every fossil fuel company. They have created the warming that brings on these unprecedented hurricanes, floods, droughts, and fires. How can they get away with not paying anything at all towards the hundreds of billions in damages?

Distraction is Big Oil and Big Coal’s best friend. While mainstream media runs around touting the “everyday heroes” in catastrophes and swooning over how disasters “bring out the best in us,” those responsible for the worsening calamities sit back and enjoy their opulent lifestyles.

As taxpayers and donors to the American Red Cross and others, we’re being taken by the oil and coal companies. We must first admit that. Then, we need government to do its job and make these multi-national corporations pay their fair share.

My upcoming novel, ULTIMATE ERROR, is about the responsibility and accountability required for the people’s survival in a national catastrophe. In the U.S., we’re forfeiting our critical thinking in favor of prefabricated political platitudes. That could possibly be our greatest ERROR of all.