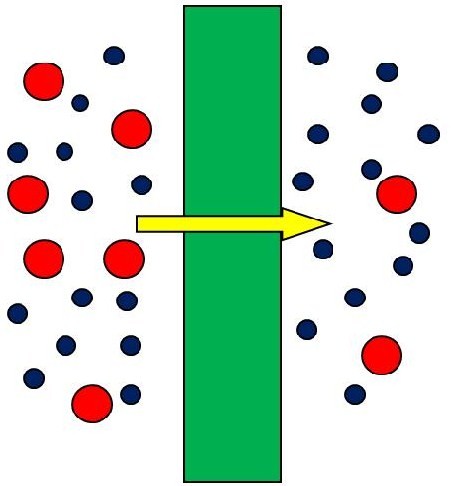 … And so we watch them in brutal solidarity

burning the huts of a poor village,

but we realize that they would hardly live

on the same block in Chicago.

I could not be silent in the face

of such cruel manipulation of the poor.

We writers naturally look for metaphors in life, and ones that often come to mind for me are the “filters” or “membranes” we use to make our lives more comfortable or more tolerable. Generally speaking, membranes are selective barriers, allowing some matter through while blocking others. Membrane physiology being one of my areas of expertise, I’m regularly reminded of this metaphor for human behavior.

In the news lately, we’ve been reading a lot about, well… the news! Specifically, information “bubbles,” echo chambers, and politically motivated “fake news.” (In the case of the latter, I suppose the word “propaganda” is passé?) All of these have in common the growing levels of control individuals have over what information they receive—what gets through and what doesn’t.

The concern, of course, is that genuine discourse is disappearing. On Facebook, for example, you have the option to “block” reports or opinions with which you disagree. The net results (if you’ll excuse the pun) are population “blocks” with (further) hardened, locked-in positions on issues that affect all Americans.

Add that to an American demographic landscape which is more segregated every day. Yes, we put membranes around our neighborhoods, schools, even entire states. With the wisdom of the fact that “divided we fall,” the writers of the Pledge of Allegiance included the term “indivisible.” Dr. King decried the hypocrisy of a nation that was sending integrated platoons “to fight and to die” in Vietnam, while incapable, back here at home, of seating those interracial troops side-by-side in the same schools.

The fear of the “other” will always exist. If it ever wanes, there’s always an opportunistic politician to stoke the embers into a roaring inferno of fear. For getting elected, it’s one of the oldest tricks in the book. So, White neighborhoods get Whiter, and Black neighborhoods get blacker. We’re shamefully estranged from each other, while the maniacally cynical profit from the inevitable discord. “United we stand,” is their mask. The prevailing credo beneath, however, is “Divided we profit!” That is the unabashed wall-builders’ call.

Let us be thoughtful and deliberate, then, in choosing the membranes under which we hide and live. Lest we heed the profiteers and allow the toxic in, while keeping the loving and harmonious out.

My upcoming novel, ULTIMATE ERROR, is about the manipulation of the people by corporate interests. The people, the highest authority according to the Constitution, are routinely manipulated, even into siding with industries that are actively destroying the planet. Doubters need only look at the outdated, outmoded, and deadly fossil fuel business as it thrives today.