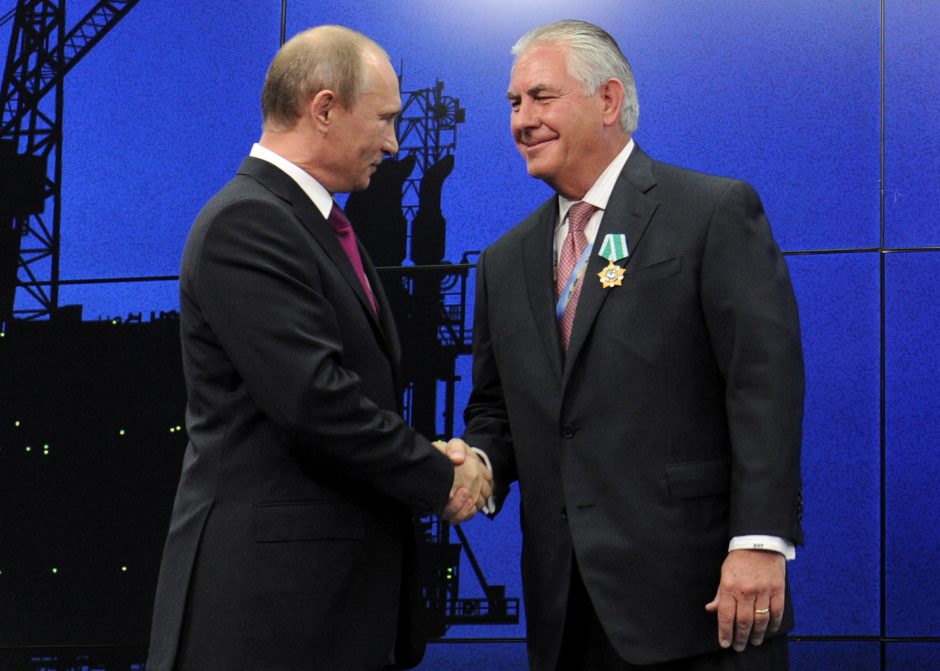 Lingering question: Why did the unpopular executive choose Exxon-Mobil CEO to negotiate with Russia?

As members of the executive and legislative branch busy themselves with the circus work necessary to maintain their kleptocratic charade, millions of Americans maintain faith in the integrity of the Oval Office. Is it really that difficult to break away from the pack and notice the colossal con afoot in Washington, D.C.? What exactly is the nature of the con, anyway? Simple: oil.

Just look at Forbes magazine’s latest list of the 25 biggest oil and gas companies in the world. The top three are Russian and American conglomerates. They operate on the basis of trillions of dollars per year and think big when they think of expansion. In a field that by all rights should be declining, the Russo-American collusion seems not at all far-fetched. This is power, grabbing more power.

Looking a little bit closer at the Forbes list, the third entry has to jump out at anyone who even casually follows world affairs. It’s Exxon Mobil and until this year, its CEO was Rex Tillerson—the current secretary of state of the United States of America. In cahoots with numbers one and two (Russia’s Gazprom and Rosneft), Exxon Mobil could crush competition and thereby control the price of petroleum worldwide.

Would business interests in the United States be willing to mount a presidential campaign that would work with Russian oil oligarchs before—and especially after—the election? If you believe some billionaires can never have enough money, then the answer must be Yes. In fact, the clearest explanation for the current plutocratic kleptocracy in Washington, D.C. is that the people running it were selected (or selected themselves) for that specific purpose long before the 2016 campaigns began.

Of course, the moneyed interest (and there are many) must run three-ring media blitzes to keep the people confused and loyal to the false populists. (What better way to camouflage a businessman using the U.S. government for private profit than to cast him as a benevolent strongman for the people?) The trick isn’t a new one, except that to a certain degree it hadn’t been pulled on the American people recently.

So, it must be acknowledged that the people pulling the strings behind this cynical marionette show are also clever opportunists. They saw America’s weaknesses: anger at the previous White House occupant and fear of “outsiders,” and capitalized on them—quite literally. What millions of Americans believed were votes in favor of an “America First” national policy actually ushered in a corrupt, steely alliance with Russia by U.S. administration officials for their own private profits in oil.

My upcoming novel, ULTIMATE ERROR, is about the protection and preservation of the citizenry by the citizenry. How safe can Americans be, in the big picture, when the government is focused almost solely on corporate profits? We are called to remember that the plutocracy’s allegiance to corporations isn’t based on economic philosophy but on the profits to be had by each plutocrat personally.