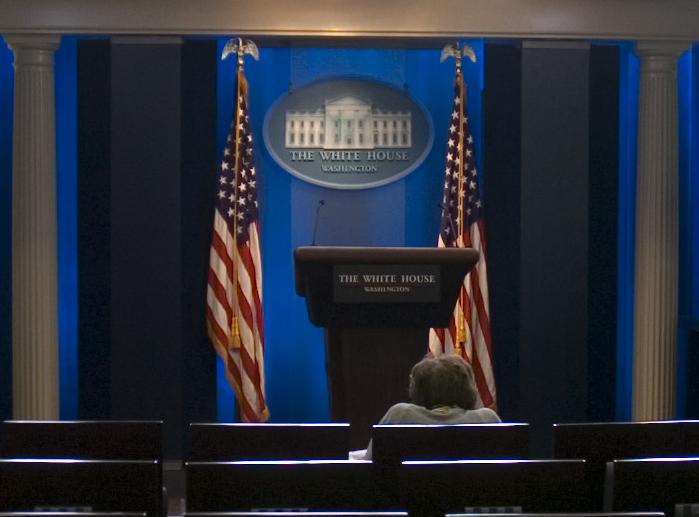 Like most of you, I heard the news this week that the White House Press Secretary is on his way out. Frankly, I’ve wondered how he could possibly take that tremendous stress for as long as he has. Journalists—trained interrogators searching for the truth (unfashionable these days)—have, rightly, hammered away at the secretary’s paltry, nearly ghostly approach to information for months now.

The administration seems to have felt that the pounding was so vicious that the public ought not to view it. “Off-camera briefings” recently became the latest tool in the White House’s attempts to control what the American people see and hear. As would be expected, the press objected strongly. But, also last week, the press secretary countered: “We engage with the press corps very robustly from early in the morning till late at night,” he said. There he showed a bit of professional flair by couching the preposterous claim (“robustly”) in the middle of a sentence the administration would consider a “benign truth.”

Issuing a false claim of benevolence, the secretary added, “The last couple, we’ve allowed audio to come in, and use it. We’ve allowed the audio to be used, today, the other day.” What does it say about a power dynamic when a group is “allowed” (or not allowed) to do something by another group? The White House is establishing the power structure, and guess who their picking to call the shots? But the administration isn’t running a private firm! They answer to the people of the United States, or at least they’re supposed to.

Is the press supposed to thank the press secretary for not allowing video of briefings, allowing audio (of late) and, somehow, allowing use of that audio? Last I checked, audio and video, as well as still photographs, taken of government officials immediately enters the public domain, and can be used not only by the press, but by anyone at all, no questions asked. Now, the White House is saying they have “allowed” the use of audio which is in the public domain?? Troubling.

We Americans are tasked with keeping close vigil on our government. They work for us, not the other way around. Some may feel that, after the 2016 election, we ought to simply let the new administration do what it wants for a while, “give them a chance,” and so forth. We must remember that such a scenario is patently un-American. While it might seem “patriotic” on the surface, the United States was not founded to allow the executive branch free reign. Ever.

My upcoming novel, ULTIMATE ERROR, is about the personal and civic responsibilities of individuals during a major catastrophe in the United States. The checks and balances on government are not limited to the three branches. The people, America’s citizenry, are the ULTIMATE check on how we’re governed. A widespread disaster adds even more importance to this great responsibility.