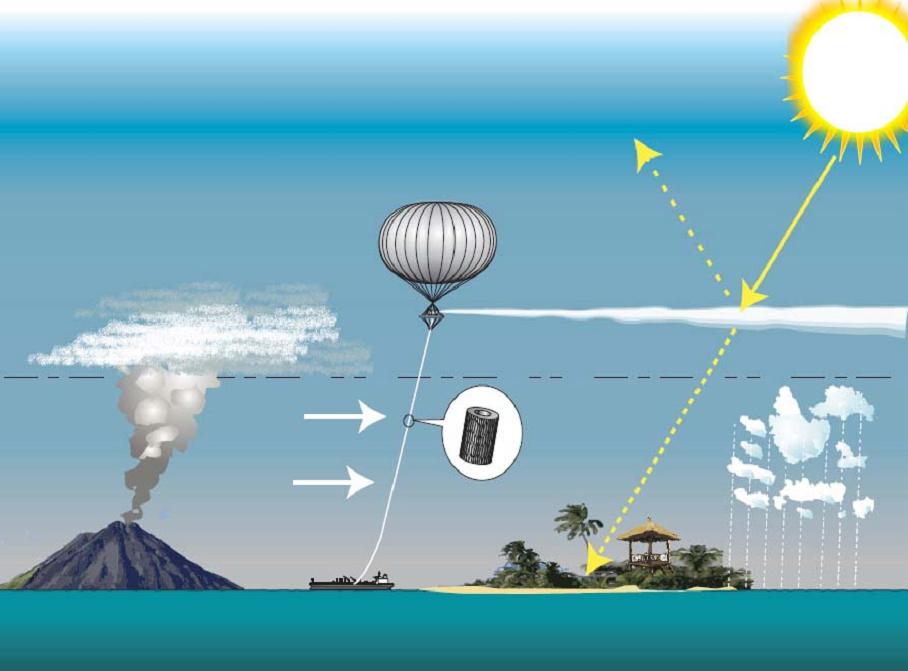 As in my novel, ULTIMATE ERROR, when science intersects with science fiction, the resulting images can be breathtaking. Picture a Lear jet piloted by a Goldfinger-type character—a James Bond movie villain—spraying the stratosphere with reflective sulfates that disperse heat from the sun. Of course, the cooling effect on the Earth would be beneficial to some extent, since greenhouse gases have made land, sea, and atmosphere too hot. So, we might imagine that the rogue rich person is going too far, either purposely to cause harm or because of ignorance of the secondary effects.

Only the movie “bad guy” is necessarily fictitious in the above scenario. A bona fide solar radiation management (SRM) industry is growing worldwide, and its intentions are both benevolent and potentially profitable. Its major challenges lie in those secondary effects, namely sulfuric acid in the stratosphere, the acid rain that comes with it, and salt sprays in the lower atmosphere.

The first practical tests of aerosol-action (aerosols being any solid or liquid suspended in air or gas) solar radiation management are scheduled for this year, and only then will the next set of secondary and tertiary effects be known—if any.

In a recent interview with New York magazine, one of the godfathers in the sciences of global warming, Dr. Wallace Broecker, commented in detail about what a post-SRM world might look like and how it might function. “[In the stratosphere] the sulfur dioxide becomes sulfuric acid… [which] back-scatter[s] 10 percent of the solar rays that hit [the droplets.] So that means if you want to get rid of 2 percent of the sun’s rays, then 20 percent of all sun rays have to hit those droplets. And of course that would make our sunsets very red, would bleach the sky, would make more acid rain. But that would be spread around the planet,” he says.

Dr. Broecker, also an oceanographer, goes on to describe geopolitical and humanitarian tertiary effects of SRM using SO2 deployment. “There’d have to be an agreement by all nations to do it, because if only some nations do this, it would move rainfall around, and everything that happened to agriculture would get blamed on it. It would be very hard to prove any of these claims were wrong. Also, it wouldn’t stop ocean acidification, so coral reefs would still get wiped out,” he told New York.

Whether or not some type of SRM eventually helps mitigate CO2-caused warming, consensus exists that it won’t solve the climate change problem by itself.

My upcoming novel, ULTIMATE ERROR, is about the brink of extinction of the human species. Daily, we roll the dice on catastrophe by the way we procure, transport, and use the natural resources we manipulate. We even take great risks when cleaning up oil spills. In my book, I explore how such a scenario could lead to the ULTIMATE catastrophic ERROR by and for mankind.